Recent months have seen a growing a body of evidence, from different sources, that NOx emissions from cars are higher when the ambient temperature is lower.  This month, Emissions Analytics mined its real-world database to assess the evidence.

The accusation is that NOx reduction devices, including exhaust-gas recirculation, are programmed for reduced operation below the 20°C of the official test.  The effect would be higher NOx emissions, with  the motivation supposedly to deliver better real-world fuel economy.

Some manufacturers argue that this is, in fact, to protect the engine from damage at lower temperatures, and that doing this is perfectly legal. However, with average temperatures in the UK around 9°C across the year, this has a potentially significant impact on air quality and governments’ attempts to achieve air quality targets.

To quantify the issue, we segmented NOx data from our on-road PEMS tests into groups above and below 18°C, and found the following differences in the average Conformity Factor (ratio of real-world NOx to official limit).

While the result for the Euro 5 vehicles was statistically significant, this was not the case for Euro 6 due to a small number of very high emitters.  As our sample size increases, we will be better able to assess whether there is a pattern for Euro 6 cars.

Looking in more detail at the Euro 5 vehicles, the data suggests that there are seven manufacturers with clearly higher emissions below 18°C, which is shown in the chart below. 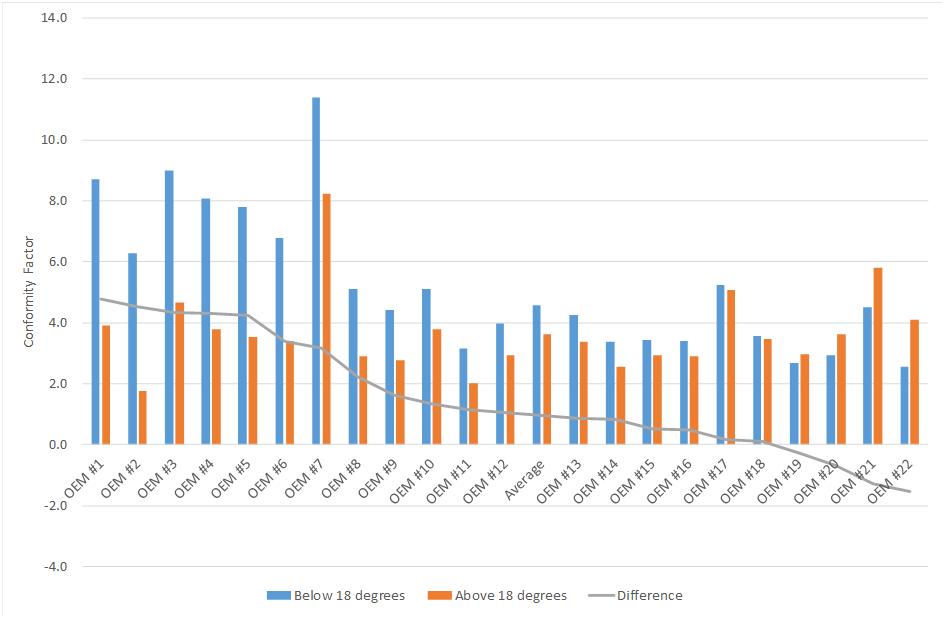 The intention of this newsletter is not to name names, but to indicate that it is not one manufacturer but several that may be utilising the thermal window loophole.  If the hypothesis is correct, it could mean that many millions of vehicles on the road today in UK and the colder parts of Europe are putting out higher emissions than expected.  Further, as Euro 5s, these vehicles are not that old and therefore will be on the road for many years to come.